A downloadable game for Windows

Description
In Transhumance, you play as the guardian of an old and mysterious animal race, the Khoris. Your goal is to lead them into a fantastic journey, using the power of your voice.

You will need a microphone and a Xbox Controller to play

Im really interested in the whole look to the game, especially the wind effect, white lines thing near the beginning, how was that done?

The look of the game is made with different post-effect we bought for unity. The main one is called painterly, it basically takes the value of a pixel and create a point, wish gives this effect of brush stroke or point. For the wind effect, it is a particle system with billboard beeing stretched by the speed of the particle. Thanks for your interest in the game !

This is incredibly beautiful!

My video is annoying, with making sounds, not understanding at first but once I stop talking it is probably enjoyable.

I am stunned by the beauty.

thanks a lot ! And sorry for the lack of english text, it's a relief it did not stop you from playing :) i'm glad you enjoyed the game, thanksyou for playing and for your video !

So... My head is spinning because I am tired of whistling, but I'll be able to say that I've finished Transhumance!

The art, environment and effects sure are lovely and original, but sadly I can't say you created a very user-friendly experience. I know you are still in alpha and microphone-related features are a hard thing to deal with, but here are a couple of things I thought about while experiencing the game :

-It would be really helpful, on the title screen, if there was something explaining that each note is related to a specific pitch. Because of their shape, I first thought there were patterns!

-Maybe the most important one: I would be very helpful if there actually was a way to hear what is the pitch of each note. I think I also have a bad microphone, but most of the time I was just making random notes to hopefully find the ones I was looking for, and I wasn't very precise so doing it again was a hard task.

-I guess the whistle is an important feature of the game (and it indeed feels like I am giving orders to my cattle with it, even if it took 2 minutes per instruction), so making it optional to allow the player performing the notes in a way or another with the controller may not be a feature you want to consider. But I am thinking about all the players that don't know how to whistle (they actually exist) that can't really play your game because of it... Though it is good to see that you thought about the less musicians of us by highlighting the notes the mic detects!

-I am complaining about all the whistling stuff, but that is because I struggled as hard as I could to keep my cattle following me (although the creatures' animation tend to be glitchy when I gather them, like only making hops instead of walking like they used to). However, it seems that nothing asked me to do so, there's no reward for it. I feel like I could have walked all the way without them and it would have just saved me some breath... Either it lacks some direct feedbacks or I missed something at a time or another. And, while I am at it, I also don't see the point in stopping them.

-Finally, back at the title screen, wouldn't it be better if you allowed the player to skip the "whistle all the notes" phase that is already quite painful to begin with?

Sorry if I am a bit harsh on this one. That's because, even after all this and looking back at it, I think I actually enjoyed the experience. But it would be too bad if I was the only one because nobody wants to make a sufficient effort. This is obviously a niche game, with its very slow pace, so don't restrain to much of the few players you could have!

Best of luck for the next steps of development!

PS: And if you're angry of what I said because I totally missed the point of your game and/or is making easy criticism, you can take your revenge by playing Oneiros -I'm from the Team Fireplace :P-, I know it is also very far from perfect!

Hey, thanks for your feedback !

We agree on a lot of the problems you pointed, and there would be a lot of things to add and to change if we had more time, but we dis what we could with the time we had :)

- For the title screen, I personnaly dont think it needs more explication, as the people we saw playing figured out pretty fast how to launch the game. And for the symbol beeing related to a specific pitch, it's the definition of a musical note :)
Also, beeing able to skip this screen is not possible, as it allows the player to continue without understanding and mastering the main control of the game.

- It would definitly be better if the player could hear the different melodies, or to calibrate the microphone. If we find the time, maybe we will add it someday

- For the fact that some people can't whistle, we were aware of that from the beginning. It was a difficult choice to do, and besides the fact that it whithout whistling it completly changes the expericence, the fact that we decided to concentrate on the whistling part left us whith less time for alternative controls. there are some actually, i'll let people know if they really want to play the game, but i'm afraid everyone would just decide to go whith other controls whithout even trying.

-We worked on the way your flock moves, even if it's not perfect it should be better now :) For the reward part, we planned to have a lot more implication and feedbacks regarding your flock, but as time passed we had to reduce our scope :'(

Finally, thank your for playing ! We just uploaded a new version with some improvement, it should be a bit easier to play now :) 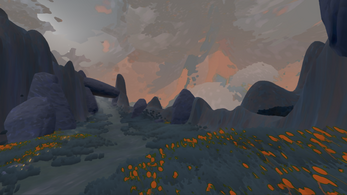 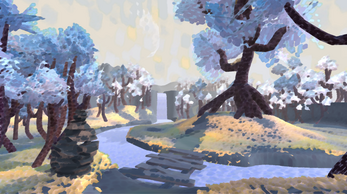 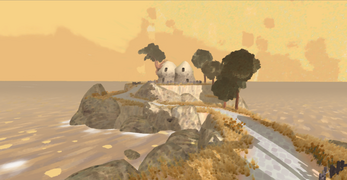